Well I'm glad so many of you liked the look of the Newlife superstore. Maybe we should have a crafters' get together. There is one of those places with 'golden arches' opposite where we could go for lunch, or the delights of Cannock Chase are not too far away with many a hostelry to be had. :0) 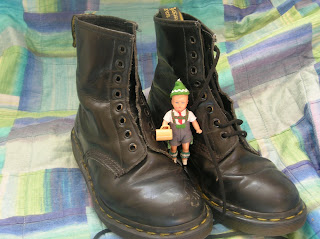 Speaking of food - last night at the in-laws was pretty nice in the end. We had a Chinese takeaway and it was scrummy. Chi Lo King Prawns - ginger (lots of it!) and pineapple but not as sweet and sickly as it sounds. Everyone wanted some in the end.

More food - at lunchtime I had my favourite sarnie ever - tuna and crunchy peanut butter. Just the idea of this makes my OH want to hurl but it's lovely. It made me ponder - do you have a fave weird sarnie filling? Send them in as I'd love to try them.


In direct contrast my least favourite singer came on the radio while I was working - Mariah Carey (aaaaargh!!!). This is what prompted me to actually go and eat something. I was being true to my word and working hard all day; so much so that I forgot breakfast and nearly forgot lunch too. 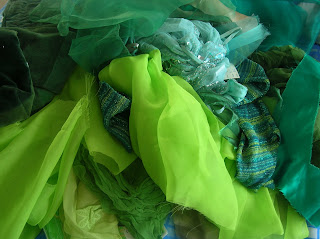 The 'greenies' from my stash.

So, the work of which I speak, the birthday belly dancing doll. I haven't quite managed to finish her. All the costuming is so fiddly and finding the right fabric in my stash has been a nightmare. I shouldn't say this as my stash is quite big (check out my Flickr for pics of just a fraction of it). But purple was very thin on the ground. The right shade of purple anyway. Then I found it! My nightshirt! I had just washed it so it is clean. And now it is chopped up and living a new life as a pair of gauntlet/arm cover type thingies. hehehe

Three views of the doll as a WIP. 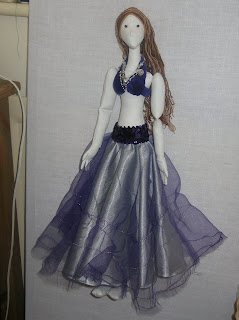 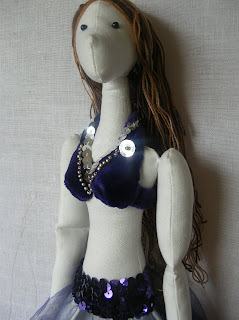 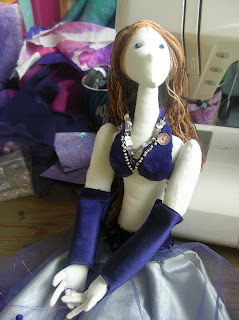 I now need help/advice from you. Two things: firstly her face. Do I just leave her with black eyes and nothing else, like my goth doll (see Flickr) or should I go the full monty and give her all her features, make-up and so on. There are also photos of older dolls WITH full faces in Flickr.

Secondly, what should I do with her hair? Do you think she needs an 'up-do' or a headress/tiara or just a trim to neaten up the ends? I'm really stuck now but want to get her finished so I can get onto other things.

Patience is a virtue I know but I really want to crack on and open an etsy shop. However, before I can do that I need to make some stock (and I'm not talking about boiling up chicken carcasses!!). I have had so many great comments about my little badges that I want to make some more of them. (This particular one has already gone to a new home as I've mentioned before. Incy now finally has it and is very chuffed as this thread in the UK Craft Forum shows.) I've had a little blast at free-machining this afternoon and I'm all fired up to be a bit more creative, but making lots of smaller, faster items rather than plodding away at one bigger project.

So, please let me have your ideas and suggestions for finishing her off, then I can concentrate on new stuff to sell and possibly do my first GIVEAWAY!!! woohoo.

Must finish now as it's belly dancing again tonight, but first I've got to go and help unload new wardrobe number 1. Do you think pics of flat pack construction would be a bit cruel to OH? :0)

Apart from the headband and belly button jewel, how about just a beauty spot on her ?

Her face has lots of character as it is I think ..
x

ethel and edna's at the bottom of edna's workbasket photoset

Like me? Just a little bit? Oh go on... pleeeeeeease

Where I Spend Too Much Time...

Friends of the Spare Room 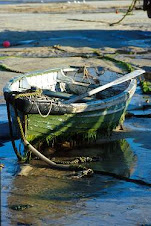